Why is slow and careful rehab so important?

When tendon tissue is first harvested for a graft, as soon as the tissue is harvested it loses its blood supply. The cells within the tissue, responsible for constantly repairing the fibres of the tissue, thus die and the graft becomes little more than a biological scaffold, in which the fibres will begin to degrade and gradually rupture with time, thereby weakening the tissue.

When the graft tissue is inserted into the knee, it begins to grow a new blood supply. New cells migrate into the tissue and begin to repair and remodel the graft. Therefore, an ACL graft is nice and strong when it is first surgically implanted. However, initially the knee is weak and the reflexes impaired. As knee function improves and the patient’s confidence increases, the graft begins to degenerate and actually becomes weaker. The ‘danger zone’ most often 6-12 weeks post surgery – where the graft is at its weakest and the patient is still not very strong.  As the graft develops a new blood supply within the knee after surgical reconstruction, the new cells remodel the graft and it becomes stronger. By 9 months, the graft will start to look and function like a new ligament and should be strong enough to cope with a full return to sports, however this is only if the person is ‘functionally ready’, meaning you have good strength, power and stability of your lower limb (which will be tested).  It is not uncommon for patients to still show deficits at around 12 months post-surgery, so a fully-functioning ligament will return 18-24 months after. 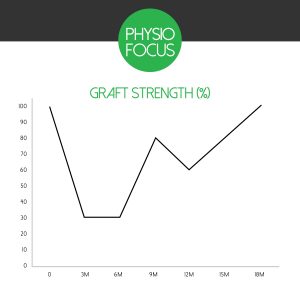 Graph showing how the strength of the ACL graft initially drops and then gradually returns to normal as the graft grows a new blood supply and slowly remodels. The graft is at its weakest at 3 to 6 months – just when the patient is beginning to regain confidence. It is therefore essential that return to proper sport is delayed until 9 months post-op.

At Physio Focus, our ACL rehabilitation includes a park-based program for middle- to late stage ACL rehab.  We were the first centre to start such a program in NSW, and are now known as being one of the best in Sydney. Let us treat you.  Contact us on https://www.gymeaphysio.com.au/contacts/